Tyler Barrett is a man whom Siobhan meets while in Paris. It is known that he works for Martin/Charles and he cannot speak French, which is part of the reason he is drawn to Siobhan in the first place. (If You Ever Want A French Lesson...). Siobhan tells him that she is having trouble with money, so he lets her stay at her hotel indefinitely, all expenses paid by Martin-Charles (She's Ruining Everything). They start up a relationship, which runs smoothly until Andrew calls Tyler, who is on his way to Rome, offering him a promotion. He goes to dinner with Olivia and Andrew and then, in a surprise visit, Bridget, still posing as Siobhan joins them. Tyler assumes it was all just one of her games when Shivette has no idea who he is. He rings Siobhan and breaks up with her, telling her that she can find somewhere else to live. Siobhan pretends that Andrew hit her, causing her to get her black eye at an attempt of reconciling with her, but he denies her. (Shut Up And Eat Your Balogna) Siobhan calls him, telling him that she's in New York, where she's going to stay for a while and he tells her that the hotel staff found pregnancy tests in her room and asks if she is pregnant, and then if the baby is his, to which she says "Yes" (That's What You Get For Trying To Kill Me). He is portrayed by Justin Bruening

He is Siobhan's pawn in her mysterious schemes, and helps her find information on Martin/Charles, as she blackmails him with a guilt trip about him being the father of her baby. In You're Way Too Pretty To Go To Jail, he turns up dead. 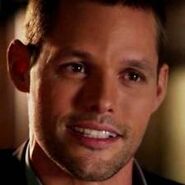 Add a photo to this gallery

Retrieved from "https://ringer.fandom.com/wiki/Tyler_Barrett?oldid=9124"
Community content is available under CC-BY-SA unless otherwise noted.