Ringer is a CW television series starring Sarah Michelle Gellar. On May 13, 2011 it was reported that the project had been picked up to series by The CW. Its pilot aired Tuesday, September 13, 2011. In October 2011, the CW picked up a full twenty-two-episode season.

Twin sisters Bridget and Siobhan (Sarah Michelle Gellar) have been at odds and find that their lives are both unraveling at the same rate. Bridget is on the run from the mob and in order to survive she takes over Siobhan's life after she mysteriously disappears. She soon discovers her estranged sister's life isn't as mundane as she had once thought.

It was announced in early 2011 that Sarah Michelle Gellar would be starring in a pilot for CBS entitled Ringer. Filming for the pilot began in March 2011 in New York City.[2] Gellar will serve as executive producer alongside Peter Traugott and Pam Veasey.[3] The pilot was directed by Richard Shepard and written by Eric Charmelo 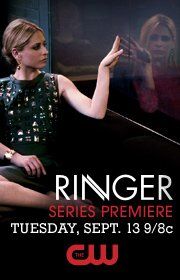 and Nicole Snyder.[4] Although the pilot was filmed in New York, the series will predominantly be filmed in Los Angeles.

The pilot was picked up to series on May 13, 2011, by CBS's sister network, The CW. Following this, ABC Studios, which co-produced the pilot, pulled out from the series, citing displeasure of the network move.[5] On May 17, 2011, it was announced that Warner Bros would now be the co-producers.[6] On May 19, 2011, it was announced that the show will air in the fall on Tuesdays at 9/8 Central.[7]

Casting announcements for the series began in January 2011. First to be cast was Sarah Michelle Gellar, who was sent the script and will also serve as executive producer. Gellar is set to play Bridget, as well as her twin sister Siobhan Martin.[8] Next to be cast was Nestor Carbonell as Victor Machado,[9] followed by Ioan Gruffudd and Mike Colter, Gruffudd will play Andrew Martin, and Colter will play Malcolm Howard.[10] Tara Summers later joined the series as Gemma Gallagher,[11] with Kristoffer Polaha being the last actor to be cast in March 2011, Polaha will play Henry Gallagher.[12]

In June 2011, Ringer was one of eight honorees in the "Most Exciting New Series" category at the Critics' Choice Television Awards, voted by journalists who had seen the pilots.[13]

Sky Living has picked up the series in the UK, Louisa Forsyth, acquisitions manager at BSkyB said of the pick-up, "Securing Ringer exclusively for Sky Living demonstrates yet again our commitment to owning the very best in primetime US drama". The first season will start airing from September 29, 2011. In Canada, it will air on Global TV starting September 16, 2011. On July 28, 2011, it was announced that Mediaset España Comunicación has bought the rights to air Ringer in Spain. On August 25, 2011, Television Business International announced that the French Group M6 has renewed its output deal with CBS, which includes Ringer. In Australia Ringer also aired on Network Ten on October 9, 2011, but has since been dropped and moved to its sister channel, Eleven on February 20, 2012 until further notice. Studio Universal bought the exclusive rights for Latin America (Argentina, Colombia, Mexico, Peru, Uruguay, Venezuela and Chile among others)and RAIbought the rights for Italia to broadcast Ringer on channel Rai 2 in 2012. DSTV has started to broadcast Ringer in South Africa on M-Net Series.

Here are a list of Awards and Noms RINGER has recieved.