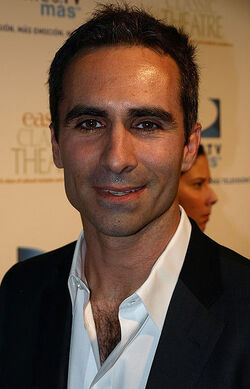 Nestor Gastón Carbonell (born December 1, 1967) is an American actor, known for portraying Richard Alpert in ABC's drama Lost and Mayor Anthony Garcia in the film The Dark Knight. He is also known for his role on the sitcom Suddenly Susan and his performance as the character Batmanuel on the live-action sitcom The Tick.

Carbonell was born in New York City to Cuban parents of Spanish (Catalan) descent. He was raised Catholic. His family moved to Caracas, Venezuela, where he attended The British School Caracas. Later on, he moved back to the United States, where he attended Deerfield Academy (with Lost co-star Matthew Fox) and went on to Harvard University in the late 1980s, graduating with a B.A. in English. His father is a business executive, and is active in the Cuban community. Former professional baseball player Rafael Palmeiro is his cousin. His Greatgrandfather, José Manuel Cortina y Garcia was one of Cuba's most outstanding orators and diplomats.

Carbonell had recurring roles on Resurrection Blvd., The Tick, Strong Medicine, Kim Possible (as the voice of Señor Senior, Jr.), and Cold Case. He also guest-starred on Scrubs ("My Moment of Un-Truth"), House ("Cursed"), Day Break, and Monk. He also played the role of Luis Rivera on the show Suddenly Susan for four seasons. Carbonell played Richard Alpert for seven episodes in the third season of Lost, and the mysteries surrounding his ageless character were heavily discussed among the fan community. While producing the final episodes of the third season, Carbonell was cast in a starring role as Frank Duque on the new CBS series Cane. The writers modified their original story plan for the third season in anticipation for Carbonell's potential unavailability. Despite Carbonell's willingness to return to Lost, CBS president Nina Tassler ruled out another Lost guest appearance. Cane was canceled during the 2007–2008 Writers Guild of America strike, freeing Carbonell from his contract with CBS. Lost showrunner Carlton Cuse said that Carbonell would reprise his role as Richard Alpert towards the end of the show's fourth season, as a result of Cane's cancellation. Carbonell made appearances in the episodes "Cabin Fever" and "There's No Place Like Home". Executive producer Carlton Cuse cited this as an unintended positive consequence of the strike. Carbonell appeared in nine episodes of Lost's fifth season. He was part of the main cast of Lost for its final season. In 2006 he appeared alongside Lost costar Matthew Fox as assassin Pasquale Acosta in the film Smokin' Aces. In 2008, he appeared as the mayor of Gotham City Anthony Garcia, in Christopher Nolan's The Dark Knight, the sequel to the 2005 film Batman Begins. His wife, Shannon Kenny, was previously involved in a Batman project, voicing the character Inque in the Batman Beyond TV series. In 2010, Carbonell joined the series Psych for two episodes playing Declan Rand, a criminal profiler.