Gemma Butler (née Arbogast) was Siobhan's best friend and also appeared to be a friend of Andrew's. She was married to Henry Butler with whom she had 3-year-old twin boys, Dash and Becks. Her father, Tim Arbogast, is extremely and famously wealthy.

She is portrayed by Tara Summers.

Gemma was always suspicious of her husband, thinking he was cheating on her. She confides in Shivette about her thoughts. A drunk Gemma confronts Olivia at a party and causes a scene. She later realizes that Olivia was not having an affair with her husband.

On Siobhan's birthday, Gemma finds out that Siobhan has a twin sister who's on the run and that Henry was having an affair with her best friend (and that she may be pregnant by him). When confronted by Bridget, she slaps her in anger, threatening to tell Andrew about it. In desperation, Bridget tells Gemma that she is not Siobhan. Gemma initially does not believe her, but eventually realizes she's telling the truth.

Gemma attempts to blackmail Bridget into sleeping with Henry to get evidence of his infidelity for a divorce, threatening to tell Andrew everything. Bridget manages to talk Gemma out of the deal after getting Andrew to leave the house. However, she told Henry of Gemma's plot and after she leaves, Gemma receives a call from Henry, who confronts her about her plot.

A crying Gemma calls Andrew and asks him to talk to her at her home, when he arrived Henry answered the door and tells him she is not home and refuses to let him in. After Andrew leaves the interior of the home is shown with broken glass and a bloody handprint on the wall, as Henry walks up the stairs a large blood smear is shown on the wall, with Gemma nowhere in sight.

Gemma is officially declared missing and everyone is made aware. Later, it is shown that Charlie is the reason that Gemma went missing, and that she didn't get taken without a fight.

Gemma is tied up in Charlie's basement. She is nearly found by Malcolm, but he is forced to leave Charlie's home before entering the basement.

Gemma is held as a hostage for ransom by Charlie when things go sour. He ultimately decides that she's not worth it and tries to kill her. He ends up missing his killing shot and Gemma knocks him out, working on getting away, she is unable to when Charlie gets back up and restrains her, telling her that Siobhan is alive and that Siobhan, not Bridget, is the reason she is here. Charlie then shoots her, killing her this time. 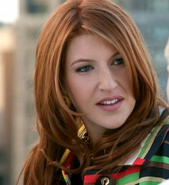 Gemma on the right

Community content is available under CC-BY-SA unless otherwise noted.