Bodaway Macawi is one of the main antagonists of the series. It is known that he owns a strip club in Wyoming, where Bridget and Mary Curtis used to work. He is wanted by the FBI for strangling one of his strippers, which Bridget witnessed. Throughout the series he also commits other crimes, such as kidnapping Malcolm and drugging him. In I'm The Good Twin he breaks into the Martin's apartment and attacks Siobhan. Bridget comes in and shoots Bodaway in the chest when he attacks her. He pretends to be dead and pulls Bridget down and he strangles her but she shoots him in the head.

He is portrayed by Zahn McClarnon. 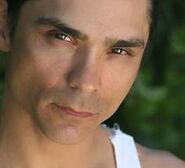 Add a photo to this gallery

Add a photo to this gallery
Retrieved from "https://ringer.fandom.com/wiki/Bodaway_Macawi?oldid=10218"
Community content is available under CC-BY-SA unless otherwise noted.